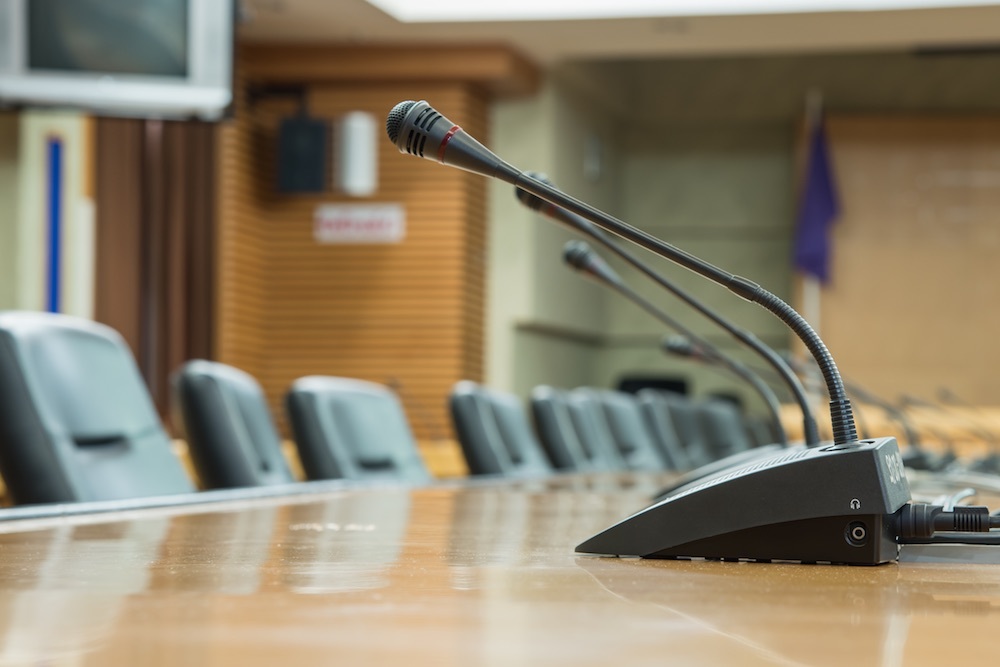 The meeting convened at 10:45 a.m. via videoconference with Springfield and all members were present in Chicago.

Chair Scholz opened the meeting by leading everyone in the pledge of allegiance.

Member Cadigan moved to approve the minutes from the November 18 meeting as presented.

Member O’Brien seconded the motion, which passed by roll call vote of 7-0. Vice Chair Linnabary abstained from the vote.

A service award was presented to Frankie Desmangles in honor of her 20 years of employment with the agency. Ms. Matthews and the board thanked Ms. Desmangles for her service.

Mr. Sandvoss presented the nominating petitions of Robert Palmer, Representative in Congress – 1st Congressional District and noted that the petitions were not in apparent conformity with state election law. He explained that the nominating sheets did not contain enough signatures equal to or in excess of the 10% of the minimum number of signatures required for the office sought.

Based on this finding, Mr. Sandvoss recommended that the candidate’s name not be certified to the March 17, 2020 General Primary Election ballot. Member Cadigan moved to adopt the recommendation of Mr. Sandvoss and strike the petitions as not being in apparent conformity with the requirements for the office. Member Watson seconded the motion, which passed by roll call vote of 8-0.

Member Haine moved to recess the State Board of Elections and convene as the State Officers Electoral Board, which was seconded by Member Cadigan and passed by roll call vote of 8-0.

The meeting recessed at 10:55 a.m. and reconvened at 11:10 a.m. with the same attendance as noted in the initial roll call.

Ms. Homer presented and reviewed the settlement offers for agenda item 6.a.1-3.

1) SBE v. Preckwinkle for President, 21644, 18AM126. Ms. Homer recommended denial of the settlement offer because it did not qualify under the Board’s settlement policy as the committee had the resources to pay the full fine. Keri-Lyn Krafthefer was present on behalf of the committee and offered her comments. She explained that when staff was notified of the on-line donation, it was determined that it was in excess of the contribution limit and the full donation was returned. Staff did not realize there was still a reporting obligation since the entire contribution was returned. Member McGuffage noted that the settlement amount was 50% of the fine and moved to accept the offer. Member Watson seconded the motion, which passed by roll call vote of 8-0.

2) SBE v. Citizens to Elect Alvin Parks, Jr., 19743, 19NF005. Ms. Homer recommended denial of the settlement offer because it did not qualify under the Board’s settlement policy. She further reviewed the lengthy history of violations and fines assessed and noted that the committee has demonstrated a pattern of disregard for filing obligations. Mr. Parks was present and apologized for the errors. He said the committee was now in compliance and committed to transparency and timely filing of reports going forward. Tom Newman, Director of Campaign Disclosure verified that the committee is up to date except for a few transfers between committees that have since closed and that there was still approximately $26,000 fines yet to be assessed from the October filings. It was suggested that Mr. Parks retain an elections attorney and an accountant to handle the committee’s filing obligations. Discussion ensued regarding ballot forfeiture and the board offered their comments regarding the settlement offer. Member Cadigan moved to reject the settlement offer, which was seconded by Member McGuffage and passed by roll call vote of 8-0.

Ms. Homer presented and reviewed the following appeal of campaign disclosure fines where she concurred with the hearing officer recommendation to grant the appeal for agenda item 6.a.6 & 12.

6) SBE v. Planned Parenthood Illinois Action PAC, 16459, 19AJ010. Rianne Hawkins was present on behalf of the committee and agreed with the recommendation. Member Haine moved to grant the appeal, which was seconded by Member O’Brien and passed by roll call vote of 8-0.

12) SBE v. IEA Local CHSD 218 PAC, 35401, 19AJ047. Joseph Terry was present on behalf of the committee and agreed with the recommendation. Member McGuffage moved to grant the appeal, which was seconded by Member Haine and passed by roll call vote of 8-0.

Ms. Homer presented the following appeals of campaign disclosure fines where she concurred with the hearing officer recommendation to grant the appeals for agenda item 6.a.4-5, 7-11:

Member Haine moved to grant the above noted appeals, which was seconded by Member Cadigan and passed by roll call vote of 8-0.

Ms. Homer presented the following appeals of campaign disclosure fines where she concurred with the hearing officer recommendation to deny the appeals for agenda item 6.a.13-16:

Member Cadigan moved to deny the above noted appeals, which was seconded by Member McGuffage and passed by roll call vote of 8-0.

A listing of payment of civil penalty assessments was presented for informational purposes.

Member Cadigan moved to recess to executive session to consider complaints following closed preliminary hearing. Member Watson seconded the motion, which passed by roll call vote of 8- 0. The meeting recessed at 11:45 a.m. and reconvened at 12:35 p.m. with the same attendance as noted in the initial roll call.

As to agenda item 6.a.18) Song v. Cason, 19CD093, Vice Chair Linnabary moved to find that that the complaint was filed on justifiable grounds and the matter proceed to a public hearing. Member Haine seconded the motion, which passed by roll call vote of 6-2. Members Cadigan and Watson voted in the negative.

Mr. Sandvoss began his report with a request for modification of Dominion WinEDS 4.0/Democracy Suite 5.6B-IL and IL ECO’s and asked Kyle Thomas, Director of Voting and Registration Systems to review the matter. Mr. Thomas reviewed his memos contained on pages 81-85 of the board packet. The main change with the system is the addition of three electronic poll books and the interoperability of those poll books with the ballot marking device. This will allow the election judges, both in early voting and at polling locations, to locate the voter within the electronic poll book and then generate the ballot voter activation card. The voter can then insert the card into the machine and select the correct ballot style. In addition to that, they have added functionality for remote transmission of unofficial results. Mr. Thomas indicated that staff tested the system for several weeks and provided additional recommendations outlined in his memo. He then recommended that the Board grant a two-year interim approval for this system. Present on this matter were Nick Ikonomakis, VP of Engineering for Dominion, Lance Gough, Executive Director of the Chicago Board of Election Commissioners, and Edmund Michalowski, Deputy Clerk for Elections of the Cook County Clerk’s office. Mr. Gough and Mr. Michalowski said they were pleased with the system and will be sure to follow the guidelines as recommended.

Mr. Ikonomakis responded to questions from the board and noted that the emergency approval request was due to engineering change orders that were considered de minimus by the VSTL.

Dominion purchases computers and workstations from an outside vendor, and when they are notified of end of life for those components, new hardware is required to work with the system.

Mr. Thomas noted that these were two separate requests.· The first request was approval for the system itself and second request was received on December 4th for approval of the engineering change orders. He said that staff is reviewing the current Administrative Rules, including a way to address this situation of de minimis changes and the possibility of waiving the six-month requirement for application in the case of commercial off-the-shelf cost modifications. Member Haine moved to grant a two-year interim approval of the Dominion WinEDS 4.0/Democracy Suite (WinDI) 5.6-B IL vote tabulation system and waive the six-month requirement for approval, which would then allow use of the ECO’s in conjunction with the WinDI 5.6-B IL system for the upcoming elections. Member Cadigan seconded the motion, which passed by roll call vote of 8-0.

Mr. Thomas gave a brief update on the emergency approval request for the KNOWiNK Poll Pad and indicated that testing is scheduled to begin on December 23, 2019.

Mr. Sandvoss presented a report on the established party candidate petition filing period that was held November 25-December 2, 2019 and reviewed the memo from Brent Davis, Director of

Election Operations contained on page 86 of the board packet. A total of 574 candidate petitions were filed, a total of 2,586 petition copy requests were processed and a total of 105,589 petition pages were scanned. A listing of election judge training schools was included for informational purposes. Mr. Sandvoss said it was a smooth filing period and many compliments were received from the filers. The board commended the staff for their hard work and congratulated everyone on a successful filing period.

Angela Ryan, Director of Legislation presented the 2020 Legislative Proposals included on pages 89-90 of the board packet. After meeting with the Division Directors, the Legislative Subcommittee would like to present legislation related to FOAI/HAVA, creation of an Elections Administration Fund, elections interference, disclosure clean up, loans made, pending signature on a voter registration application, procedures for an Advisory Public Question, E-Canvass and Omnibus Bill language. Member Donahue moved to approve the 2020 Legislative Proposals as presented. Member Haine seconded the motion, which passed by roll call vote of 8-0.

Reports on voter registration activity and the cyber navigator program were presented for informational purposes.

The fiscal status reports and two year plan of staff activity for the months of December and January were presented for informational purposes.

Member Watson moved to recess to executive session for consideration of personnel matters.

Member Cadigan seconded the motion, which passed by roll call vote of 8-0. The meeting recessed at 1:20 p.m. and reconvened at 1:59 p.m.

Member Watson moved that the contract of Ken Menzel, General Counsel not be renewed.

Member O’Brien seconded the motion, which passed by roll call vote of 8-0.

With there being no further business, the Board unanimously agreed to adjourn until Thursday, January 9, 2020 in Chicago. The meeting adjourned at 2:00 p.m.

Want to get notified whenever we write about Illinois State Board of Elections ?

Sign-up Next time we write about Illinois State Board of Elections, we'll email you a link to the story. You may edit your settings or unsubscribe at any time.

Illinois State Board of Elections